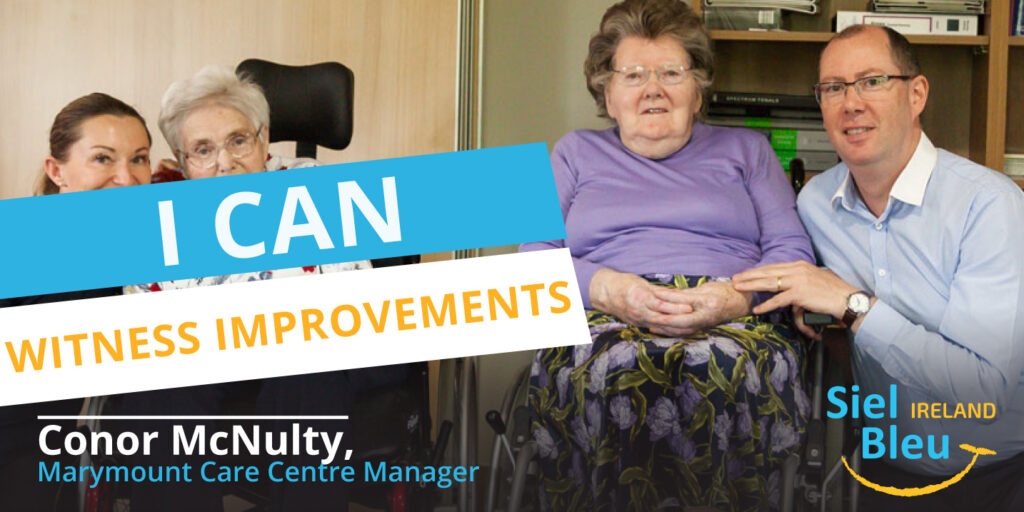 I Can Witness Improvements In Our Residents

Today in our I Can champion series, we would like to introduce Marymount Care Centre, a family run nursing home in Lucan. Conor McNulty, the General Manager of the establishment, along with other staff members, are changing the narrative of nursing homes one resident at a time. In 2013, Marymount started utilising Siel Bleu exercise classes in their establishment, with Martina leading the exercise classes twice a week. 6 years later, with 91 residents, and 10-12 participants in each session, Siel Bleu’s impact is still going strong to this day. 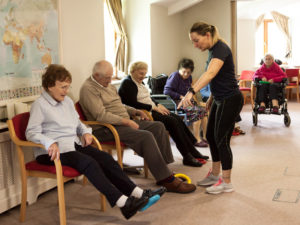 Their progressive outlook on being active has proven to be extremely successful for the residents they serve. At Marymount, their approach is focusing on abilities over disabilities. At any stage in life, we want to enjoy our time on earth, and a big part of that is maintaining our independence. Yet, for many of the people who come into the nursing home they have exhausted their abilities, and become wheel chair bound. This can happen from someone falling, and losing their confidence, or from lost muscle mass due to physical inactivity. Most people would accept this condition of a resident, and move on. However, Marymount believes in another way, one that helps residents regain the majority of their abilities, such as walking again. This is through utilising a holistic methodology that involves physiotherapy and exercise programmes like Siel Bleu.

Through the multiple success stories, and over 32 years of experience, the nursing home has developed a multidisciplinary approach. This allows for residents to have a whole range of things they can tap into. Health is a state of complete physical, mental, and social well-being, which means to have a high quality life you cannot focus on just one aspect of wellness. Marymount has proven this concept with their residents time after time. Since residents have access to Siel Bleu exercise classes, physiotherapy, and care staff that will get them up, and moving in the morning, it has been shown that their residents are stronger, happier, and overall healthier. 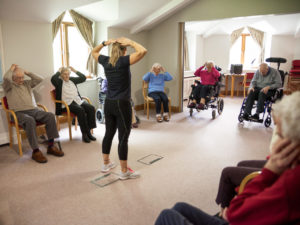 In addition to their holistic methodology, they believe that the opinions of the residents, and their families matter when it comes to how they run the facility, and the programmes they put on. This is why after 6 years, Siel Bleu is still servicing Marymount, as Conor conveys, “Siel Bleu is non-negotiable…the want is driven by the residents.” Not only is there a significant difference in their physical abilities, but also there is observable change in their mood. Conor vocalises, “They are coming back from the room with a pep in their step after (a Siel Bleu) class, and rarely people complain about going” Likewise, the families of the residents have taken notice. When they come to visit, if their family member is in a Siel Bleu exercise class they will wait for them to be done because, they know how important it is.

Most of all, Siel Bleu is for everyone, and anyone. Their most vulnerable residents are the ones who cannot speak for themselves, and have issues like Dementia or Alzheimer’s disease. Marymount’s staff has noticed that no matter the circumstances of the person, they are able to go to the classes, participate, and follow along with those who are next to them. Conor adds, “Siel Bleu is for anyone… It’s not just for those who are cognitively sharp,.. you work with what you have and maximise that potential.” 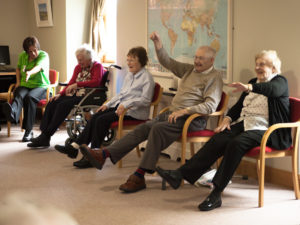 Establishments like Marymount Care Centre show that exercising is not just for the younger generation, but is vital for those who are older. It gives them the strength to go in a car with their children to go out to lunch, or just move about the house freely. Stories of an increase in abilities, mobility, and independence at Marymount, are a large part from Siel Bleu classes in conjunction with other activities. For those who are sceptical, take it from Conor when he expresses, “Anyone who is not doing physical exercise in nursing homes is missing a trick… we cannot give up on people because they are in their eighties and nineties, we are living longer than ever… age is not a determining factor, we do not give up!”

Check out our I Can Campaign ad for 2019