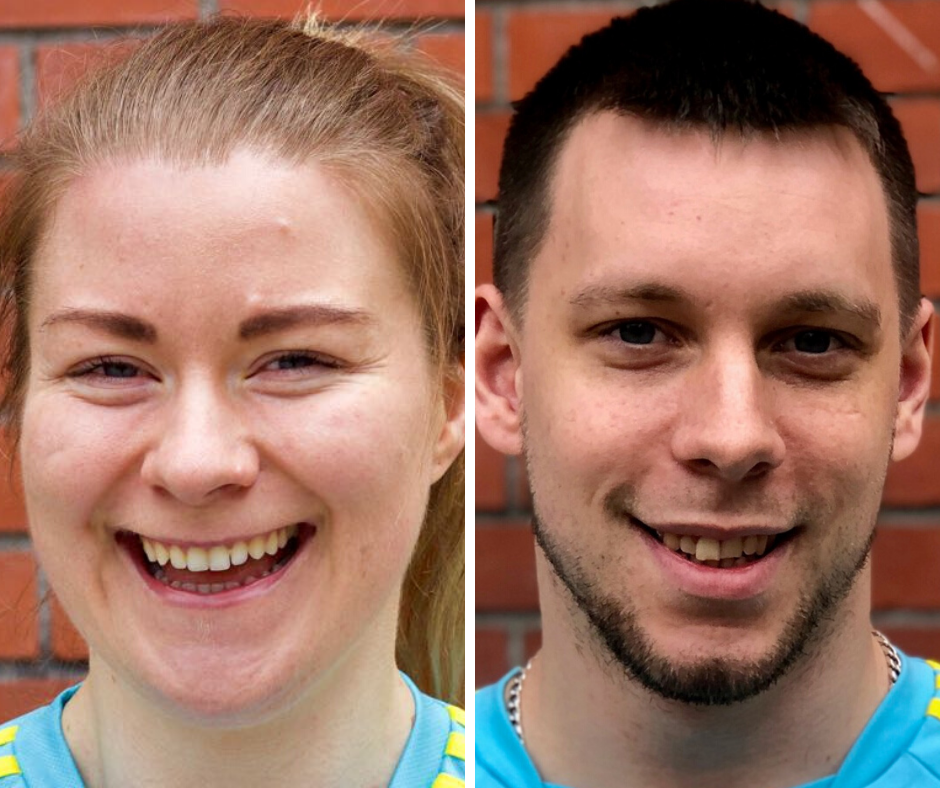 March 4 is Health & Social Care Professionals Day! On this day, make sure you thank your local health and social care professionals for all the hard work they do helping people and the communities they live in.

To celebrate, we interviewed two members of our Siel Bleu Ireland staff, Aisling Warburton and Matt Naumczyk, about their experiences working at our organisation. Matt is a recently employed Physical Trainer in South Dublin, having just started a month ago, while Aisling who is based in the midlands will be completing her fourth year in April. Both are dedicated Physical Trainers who are fantastic at their job and we are very grateful to have them as part of our Siel Bleu Ireland team!

How did you come to work for Siel Bleu Ireland?

Matt: Seeing the job offer for the position of physical trainer, and then going through the website. I liked the way that Siel Bleu has the people actually improve their lives and their quality, with the movements and their health and all the things around that. That was something I wanted to do for a long time, so I just applied for it straight away and I got it.

Aisling: I studied health science and promotion in college, so from that I knew I wanted to work in the area of physical activity and health promotion. But I didn’t want to do your general exercise class … by trying out different modules in college, I was interested in working with people with disabilities or chronic conditions or older adults. What you bring to the residents of nursing homes or people with chronic conditions was more rewarding.

What classes do you teach?

Matt: Pretty much a mixture of everything, but mostly nursing home programmes, the Exercise, COPD & Me programme and community groups.

Aisling: When I first started I was based in nursing homes, but now I have nursing homes, Exercise, COPD & Me groups, stroke support groups with the Irish Heart Foundation and active ageing community groups as well.

What would you say is your favourite part of the job?

Matt: Just meeting new people and having a laugh, the craic. … It’s really enjoyable when you’re going through the community groups and you have the chance to have a laugh while you’re exercising and moving. So just the connection with people, the laughs and the banter.

Aisling: With my COPD and stroke support groups, I know that sometimes the class may be their only outing for the week. So it’s going to the group knowing that they look forward to it each week and they enjoy getting their exercise, as well as the different games and competitions.

Which exercises do you enjoy teaching the most?

Matt: Probably the one to one’s. I try to add things in that would be useful for people but they may not have known it. For the community groups, for example, I’ve started lifting one leg and passing a ball around, which challenges your balance. … If you don’t have balance, you have a higher risk of falling — so it’s fun while you’re doing it, but it’s actually helping participants. I like the equipment as well. I suppose I don’t really have a favourite one; they all fit in somewhere.

Aisling: For me I suppose it varies from group to group. What I do for one group, I may have to change for another group. But it’s nice to push the group and get them up and doing things they think they can’t do, … seeing how happy they can be from doing those different movements and tasks again.

Do you have a particularly memorable story from your time working with Siel Bleu so far?

Matt: Probably the first day. … I got welcomed right from the front door, we had a laugh and that’s my first memory. Something fun happens pretty much every week at one of the classes — with the nursing homes, there’s always something — but the most memorable one so far was my first ever class and having a laugh.

Aisling: Just this past month, I had a man who was very sick prior to Christmas and he found it really difficult to come back out and get into routine. … But when he came back into the group, he said he was better than ever after attending a doctor’s appointment, and he felt so good being back.

What do you think makes Siel Bleu Ireland the organisation that it is?

Matt: I think it’s the trainers and their willingness to help. … They always say “if you need any help, just drop a message.” They actually do mean it, because I’ve dropped others a message a few times they’ve always gotten back to me straight away with any questions or any tips. So I think it’s the people — and the culture around it as well, like the classes having a laugh and having communication with the people teaching. I think that, the people, is the most important thing.

Aisling: Even though we’re bringing exercise classes to different groups, it’s also the social factor and building a relationship with participants. So we’re not going in and just putting them through the paces for an exercise class, we know the people in the group individually and we can relate to them and build a relationship. As I’m well aware, most trainers know each client by name, and I think that it’s important to have that relationship and work alongside them, rather than just going in and telling the person what to do.

What would you say or what advice would you give to someone who is thinking about becoming a trainer at Siel Bleu Ireland?

Matt: Just stay positive, keep smiling. … Sometimes if you’re working at a nursing home, you realise the kind of people there aren’t able to do some stuff. For your needs, once you’re out, just do something to get your mind off of it. And when you come back the next day, focus on class again. … Be the guy that they actually look forward to seeing each week, not the guy that they’re like “ugh, not him again,”.

Aisling: I’d say it’s so enjoyable and rewarding. Every group varies, so what you do one day versus what you do an hour later with a different group, or from week to week, is always changing. It’s really rewarding and you just have to be able to build a relationship and get to know the group personally.